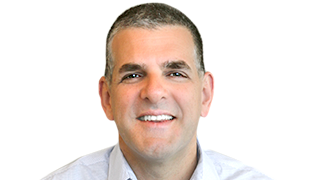 Guy leads EFI’s Imaging of Things transformation – printing on any materials from analog process to digital – as the company researches, invents, and deploys next-generation digital technology that brings brands, ideas, and images to life for family-owned businesses and partners around the globe.

Under Guy’s leadership, EFI transformed from focusing on office printing with 100% of its business coming from OEMs to now, where EFI is focused on digital printing in areas of growth with about two thirds of the business sold directly or via resellers. EFI has seen a 12% growth rate on average in the past four years. In 2010, Guy set a goal for EFI that the company would reach $1 billion in revenue, up from $400 million the prior year. Each year since then, EFI has recorded record revenue, most recently generating revenues of $992 million in 2016, a 12% growth over the year prior – all while maintaining a 12% revenue CAGR since 2010.

Guy joined EFI in 1995. He was named as CEO in January 2000 and served as president of the company prior to that, where he spearheaded the launch of EFI’s first print workflow software. From 1996-1999, Guy led engineering efforts for the company's largest product line, Fiery Servers Division, culminating as Vice President, Fiery General Manager.

Prior to EFI, Guy was Director of Engineering at Interro Systems and held software management positions at ASP and Apple Israel. For five years, he served as an officer in the Israeli Defense Forces (IDF), managing an engineering development team and, later, was an Acting Manager of one of the IDF's high-tech divisions.

Guy holds a Bachelor of Science degree in mathematics and computer science from Ben Gurion University in Israel.

He was a member of the Israeli National Bridge Team and as a youth placed second in Europe and fifth globally in the World Junior Bridge Championships. Guy has served on the Board of Directors for CheckPoint Software Technologies since 2006.

Guy is a 2015 recipient of the Michael H. Bruno Award from the Technical Association of the Graphic Arts for outstanding contributions to the graphic arts industry. He was named a 2015 Game Changer by the Silicon Valley Leadership Group. In 2014, Guy was inducted into the Soderstrom Society, the Epicomm honors organization that recognizes distinguished contributions of print industry leaders. Guy was named a “Legend of Silicon Valley” in 2013 by the Frost & Sullivan Institute.