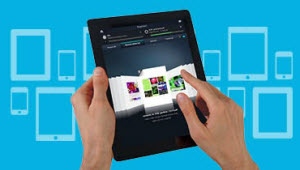 Manage Fiery Driven printers from your iOS and Android devices
Fiery Go gives you more flexibility and allows you to multi-task for a more efficient workplace. The app is simple to use, takes just minutes to deploy and it's free. Give it a Go today!

Fiery® servers
The Fiery server needs to be visible to the mobile device over the Wi-Fi network.